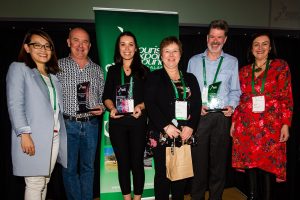 Rotorua tourism operator OGO has taken away the title of Small Business Operator of the Year at the 2019 Tourism Operator Awards.

The awards were held in Christchurch last night by the Tourism Export Council of New Zealand (TECNZ).

Three of New Zealand’s top tourism operators were recognised at the awards as the best in the business, voted by industry peers.

Co-owner David Akers, who runs the business with his brother Andrew, said it felt awesome to receive the award and that it was always great to get something where you were recognised by your peers.

He said tourism operators within Rotorua and New Zealand was a pretty tight-knit industry, and there was a bit of good-natured ribbing between them with these sorts of awards.

“I think there’s a couple things we’ve done over the last few years that make a difference.”

Akers said this included their staff wellness programme, which included things such as doing mindfulness exercises in the morning and courses – “Looking after our crew has been a big part of that”.

The team was acknowledged for completing the Manaaki programme, which is a Rotorua-centric customer service programme specific to their destination covering Manaakitanga, te reo, Te Arawa history and Rotorua insights.

Akers said they took part in the programme because OGO was often at the front line with international tourists coming through.

“People ask questions when they come through, and for us to be good ambassadors for the whole region is an important thing.”

“Past winners comment on the significance of receiving acknowledgment from their peers within the industry. We are pleased to announce that the winners have a regional spread and are from all corners of New Zealand.”

Chen said OGO Rotorua was another amazing company that had embraced Manaakitanga and how this could be incorporated with their visitors.

“Andrew Akers and his team can be elated for their contribution to the local community.”

OGO Rotorua is owned and operated by the Kiwi inventors of downhill ball rolling.

Akers said OGO Rotorua had bought Zorb Rotorua this year and that the companies being back together meant it was all coming full circle.