The Zorb journey has come full circle with the inventor buying back the company launched 25 years ago, amalgamating the OGO business to offer the world’s premier ball rolling park.

The agreement between Zorb and the inventor of downhill ball rolling Andrew Akers and his brother David Akers of OGO, went unconditional on Tuesday 14 May. As of tomorrow, the Zorb Rotorua site will be closed with all pre-paid Zorb tickets able to be redeemed at OGO.

Akers says he’s excited about the fact he and David will be reunited with the brand they created.

“It’s a little unreal at this stage and it may take a few months to sink in.

“In a strange way, the Zorb brand has always remained with me and despite being in competition since we left the business and launched OGO, I’ve always been attached to what we created all those years ago.”

The original idea for the invention by Akers and Dwane van der Sluis came from wanting to walk on water. The double skinned inflatable sphere was created with no previous experience or knowledge – they used plastic and glue, starting from scratch to continually improve the ball. However, the problem was the finished sphere couldn’t be controlled on water, so they started rolling people down hills instead.

The sphere was initially called The Orb, then NZorb, finally settling on “Zorb”, with trading beginning in December 1995. Bringing on board two investors, Zorb Limited was created, and the team commercialised downhill ball rolling, later setting up their own franchise network around the globe.

Unhappy with the direction of the company once professional investors became involved, Andrew and David left Zorb in April 2006.

Fast-forward to 2010, the brothers set up their OGO (Outdoor Gravity Orb) downhill ball rolling operation in

Akers says in the last five years he has been talking with Zorb’s current owners about potentially purchasing the business. An agreement was finally reached this year.

“We have purchased the entirety of the Zorb group of companies including all patents, international trademarks, assets and opportunities.”

He explains the addition of Zorb to OGO will allow the business to reinvest further in the infrastructure of the OGO site, enhance the customer experience and cement the site as the premier ball-rolling park in the world. 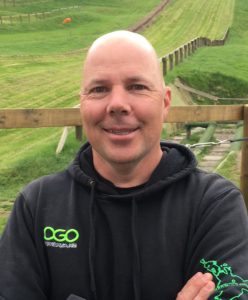 the brands side by side, while a decision is made for the future.

“We’re looking forward to clearing up any confusion in the marketplace.”  Akers says the journey with his invention has taught some life lessons.

“Have passion for what you do, enjoy every element of what you do, make your job into the most fun thing you can do and have the courage of your convictions.”

Our favourite places to eat in Rotorua, NZ